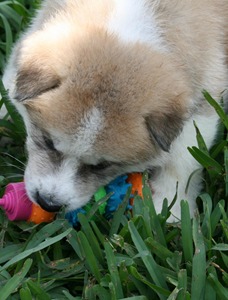 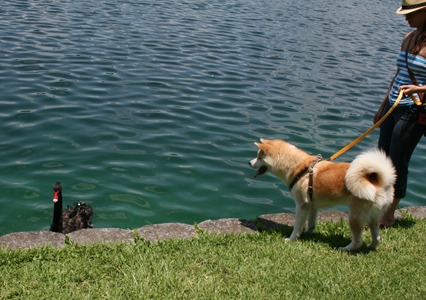 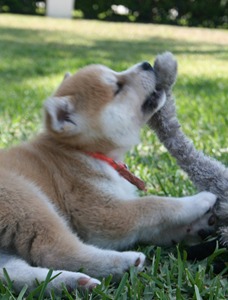 My husband began his journey with the Akita breed in 1986 with the purchase of his first Akita. She was an American Akita named Kia. My husband fell in love with her instantly, her calm demeanor and loyalty made her the perfect companion. However he had purchased her from a puppy store and within a year she fell terminally ill. Unfortunately she did not have a long life, due to her puppy mill background. After that we were determined to never give our money to a puppy store/mill again. We began our search for a new Akita and a reputable breeder.
In 2001 my husband discovered the majestic Japanese Akita Inu. These dogs although considered the same breed as the American Akita in the United States are very different. We began our search for the Japanese Akita Inu in America. We contacted numerous breeders in the US only to find that they were breeding Japanese Akitas and American Akitas together. Although the AKC finds no problem with this we do. The body structure of a Japanese Akita differs greatly from that of an American Akita. We contacted a breeder in California (they are not breeding anymore) who reassured us all she dealt with were Japanese Akitas. We purchased a puppy from her only to receive a dog that was not a pure Japanese Akita.
Next we began our search through the European Countries since the FCI (this entity sets the breed standards for most of the world other than the US for dogs, they also hold the World Dog shows) is used in the rest of the world. The FCI recognizes the Japanese Akita and the American Akita as two separate breeds. We then found well know breeders in Europe for Japanese Akitas and began our struggle to get a Japanese Akita that was of show quality. After spending nearly $4000.00 on a dog from Europe with the reassurance of them being show quality we received a dog that did not even meet their own standard, and had eliminating faults. We were once again disappointed and still searched for the quality we wanted.
After spending numerous years searching for these beautiful dogs to have as companions we found that we are the only part of the world that is missing out on this breed. We now realize that our love for these dogs needs to be shared. That is why we began our own small kennel, to allow America, especially the east coast, the chance to embrace this breed just like the rest of the world. However, we are not your everyday breeder we have a small kennel and our dogs are a part of the family. They are socialized toward children and strangers and they spend their days playing outside, watching TV with us, and lounging around in the shade of the trees. We take great pride in our small pack and have committed to breeding healthy and well-tempered Japanese Akita Inus Only. We maintain that Japanese Akita Inu and American Akita are two very different and distinct breeds not types.